Enjoy, all of you with a twisted sense of humor.

They arrive. Every Friday night this crowd of women strides through this lane and although there are people living in the houses around it, no one ever hears or sees anything. Their black farthingales rustle against the cobblestones and, good for them, the mourning veils cover their faces; and what they don’t, the darkness does. The lanterns that have been placed on the big streets by the order of the mighty men of the city – let there be light, let chaos be defeated – are too far away from this small remote lane. But they have another order and orders here. And that is other than what is known as The Universal and Eternal Law.

Some of these figures seem to be tense, and the reason probably is that Theophana of Naples, the professional and trustworthy poison maker, has at last been caught and executed. Others are, though, much more relaxed and talkative, for they know that when one dies, soon there will be another. Just like in life as a whole, and just like in the sorority itself. If some of these women were to get arrested and – depending of their quality – send to the gallows or to a nunnery, or made to pay a various penalty, the world is full of their potential sisters anyway.

And they would be arrested by laws that have not been written by their kind. Laws that have been designed merely in order to protect the privileges of their designers, although some cowards may call that necessary or inevitable. Is it not a sign of a great notion of honor – to not humbly submit to something so unjust? 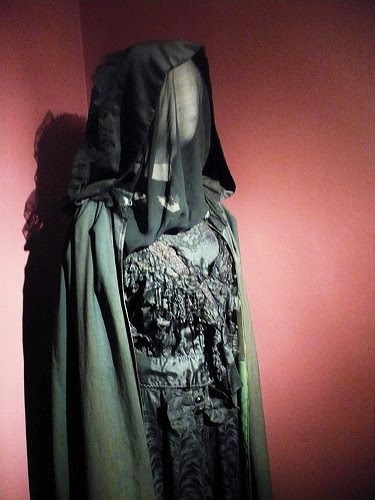 A black dress, just like everyone who has the quality of a widow. Just like the tropical spider that was drawn and studied by the sister Maria Sibylla M*** who travelled over the ocean in order to at last focus to her serious research. She actually drew this fascinating spider several times, from different ankles, closer and further. The spiders also weaver webs so brilliant that any of these women would be embarrassed. Above all, the spider does what she does and nobody can put her deeds into question. Mother Nature has created them the way they are, and what a blasphemy it would be to go against Her will.

The black dresses are not made of fabric only. They are made of the husbands’ skin – the dead husbands whom the women are practically replaced in the eyes of the world. Actually, they have become them. Someone is the leader of a successful shipping company or a trader of exquisite exotic goods, some other is the sole mistress of three manors. The most insatiable of them, the Countess of *** has already had four husbands and is soon to marry the fifth – a much younger little fop of a duke that has reputedly been stunned of her ripe beauty.

But he has no idea where the skins and bones of his precedents lie; definitely not in the graves that have their long names written in them. He has no idea of the key the Countess carries around her cream-white neck, or what was eaten in the funeral of her last husband.

When one gets married, she has to swallow the man through at least one hole, through one lips, and chew well – it is called the consummation of marriage. Best of all is if she lets her stomach process and reform it and, in nine months, push out the repulsive final product. It is all just life, the great circle of life. Why not to go all the way and create an analogy, a beautiful harmony between creating and keeping up life? The ultimate, most natural meaning of man has been written in the Book of Nature if one just wants to understand.

The widows go, go different ways only to meet again. They now have time and money to live, money of their own, money to buy anything they have ever dreamed of: jewels, fans, fabrics, laces, wines, even books if one wants to develop her mind. Anything that makes this vile world a bit more beautiful.

And even though on some Fridays there are less women present than on the last, in long term their number is only increasing and the materials of their dresses vary from silk to linen to frieze.

Oh yes. A prose ballad is a short story - or a case study - with a macabre, grotesque, and/or morbid twist. One of my prose ballads is Mors Botulinica that was published (in Finnish) in the issue 3/2013 of the literary magazine Lumooja.