The Most Hated Fictional Man in Finland


You know what the Finnish masses (and definitely many educated young people too) detest more than anything? The answer is simply anything beautiful, refined, or sublime – or anything that hints that there could be something else or deeper than the raw naturalistic reality. You know, the one where we are all “nothing but animals” or “all the same s*it” with mechanical, blank-minded, simple urges. Nothing’s sacred – except, of course, this very view of the world itself.

One example of this comes to my mind on every damn Independence Day of Finland (the sixth of December), when “the second national epic” of our country is cited more than anytime else and the ‘50s film based on it is broadcasted from TV. Tuntematon sotilas (“The Unknown Soldier”), a most lively, intense, and bloody novel about a Finnish platoon in WWII – and a portrait of edgy men of the people who have a healthy down-to-earth attitude towards life and the horrors of war. Their free spirits may be tried to be controlled by their evil company chief, but in the end the rough red-blooded man is in the right compared to the decadent upper classes.

Or at least that is how the popular paraphrase of the novel goes. 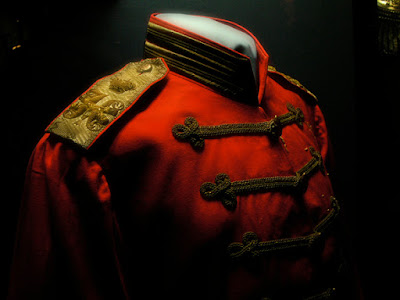 The said company chief, an officer named Lammio, could well be the most hated man in Finland (the characters of Tuntematon have pretty much become actual people in the minds of many Finns). His name has become synonymous with militarism, coldness, bad leadership and, of course, arrogance. He isn’t even allowed to tell his own point of view in the book; so much he annoyed even his own creator, who was himself a common working-class man. But what was the actual crime of this skinny, shrill-voiced young man who was braver than any of his men?

Anything that I mention happening in the war – yes, it does happen in the original novel.

If I have ever cared about something in my life, that something would be sublimity. It is the ultimate reason why I entered the military academy – I, who had always dreamed about becoming a scholar, a scientist, a mathematician or something else that can stay alone in his own cell and focus into pure intellectual work, pure spirit, without any distraction. In military service, though, I understood it would not be enough for me. For is there anything else more sublime than an officer? A hero respected by his whole nation and remembered even after departing this life? According to the old and noble ideals, strength and beauty meet in his essence – as the ability to force a thing so primitive as killing into a sophisticated form. More than anything, I have always believed in the fundamental imperfectness of Nature and the superiority of human will.

There is some definite symbolism in the fact I was born in the same year than my fatherland became independent, and was baptized with the name that has been carried by our land’s national saint as well as several kings of old European civilizations. And just after I had graduated from the military academy, the World War began… And what a smile from Fortune it was, when I was immediately made the company chief after the former chief, an old captain, was killed in action, due to his own stupidity. He presumably thought he was still in the first Great War. A self-righteous relic was he, and he always despised us, the first generation of cadet officers in the independent Finland.  And he always pretended friendship with the men, though he knew very well that none of those uneducated men would never be able to higher thinking.

Still, for a long time, I tried to make my machine gun company into the most splendid department in the whole army. War is so cruel that it has to be made beautiful, like the noble and brave Finnish warriors in the Thirty Years War already knew. I retained my “vanity”, as my desire to make myself also look sublime has always been called: dress even more formally than expected, keep my boots brushed, comb my hair with water, trim my nails. The officer has to command others, his inferiors. Therefore he has to also be better than them: more courageous, more intelligent, able to bear more. That is how natural hierarchies work.

But apparently I over-estimated those men, no, those senseless brutes. The old captain had already lulled them into believing that the war would be something similar to the fights in childhood. In other words, told them what they wanted to hear. And the leader of the third platoon does exactly the same now; himself a simple countryman, thinking that the most important trait of an officer is whether his men like him. What a spineless sloth, a disgrace for a real man! There are much more important things, especially in a real war that is not waged over the feelings of a single individual, but the fates of whole nations. But no, this descendant of bog-hoers is too afraid of that his men would, some day, have to have the unpleasant time to grow up and get a grip of their own fleeting desires.

That is what I do. I have always cared more about ideas, principles, and visions, than people. I have no difficulties in thinking dead men as numbers. This is war. And that is why I have been promoted more times than any other officer in the whole battalion: because I focus into the pure matter, ignoring all the distractions, just like I have always done. That is not to say I was not able to have fun. Or could someone claim that I had no eye for female beauty, or that I could not drink? Still my thoughts do not rudely stray around those two things, like my men’s.

Actually their banality is most flagrant in relation to the sex that should be particularly protected by us soldiers. Not at all respecting the delicacy of the feminine soul, the men talk about women as if they were some kind of “stuff that has to be equally shared”, by their own words. The most unbelievable case for now, however, has been what happened yesterday, when the supply vehicles were retreating. A member of women’s auxiliary services was standing by the road – and from the dozens of men, I was the only one who even treated her like a human being.