You think the modern Western culture is over-sexualized, hedonist, individualist? First, don’t make me laugh with that “over-sexualized” stuff. Have you ever actually studied any other periods and/or cultures? And second, bad news: I’m doing anything I can to make our culture even more hedonist and individualist.

Hedonism: the only rational approach to life.

If you believe in the value of the subject, the individual, then you also believe in infinite sexual freedom, of everyone.

Note: the freedom to not have sex is part of that freedom, too. Rape in its many forms is an attack towards this and therefore the true immorality. “Involuntary celibacy” is something no-one has a right to whine about.

Our culture is plagued with a bizarrely ambiguous approach to sex. It’s either naughty and sinful, or the meaning of life. It’s never just something fun to do and not make a big fuss of.

This isn’t about celebrating “forbidden” for forbidden’s sake. This is about getting over rules that have no point. There’s always some Reactionary moron who squeals “But should everything be accepted?” Absolutely not. But I haven’t yet heard a relevant argument against sexual freedom.

The heterosexual date culture of today: a playfield of double standards and unwritten manuscripts. And on the bottom of everything there is lying the assumption that all this will or should lead to a Serious Relationship. (“Oh yes, it’s perfectly okay to experiment a bit before you find The One and settle down.”) 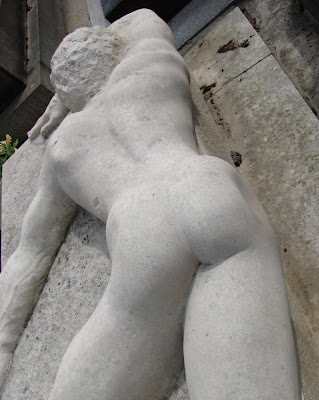 The only place where you can find a trace of sexual liberation today is the subculture of men-loving men. You meet, you have sex in the closest bush or bathroom, you separate. And that’s that. Honest pleasure for pleasure’s sake. No duties, no dependency.

And of course, that’s not what you see in the politically correct picture of the sexual minorities. The touchstone of respectability seems to be whether you’re willing to “commit”, that is, submit to being owned by someone else.

Marriage (be it sanctified by the state or church, or just a “relationship”) is a form of slavery. Always has been, and will be as far as “committing” mean restricting your freedom (for example, to have sex with anyone willing) just because your partner doesn’t like it. This counts even if you just have to “ask their permission”.

Of course, if someone really and truly decides they want to be obliged to someone this way, it’s their choice. After all, people can, say, whip themselves every day if they want to. The problem is how it is currently expected from all people, and everyone who has no interest in it is labelled “selfish” or “not a full-developed personality”.

Jealousy is just an emotion, and it can be unlearnt. It’s not some mystical “natural” that should not be touched – and besides, since when “natural” has meant “good”?

Some idiots call casual sex “mutual abuse”. How is it abuse if both sides know what they’re doing and want it?

I know better than you what you want and what is good for you – the root of all modern oppression. The same phrase is at the core of contemporary credos such as “Everyone needs a partner/ x amount of sex to be happy” or “Love is the true meaning of life”. Unfortunately, some people make self-fulfilling prophecies of these myths.

Love is intense friendship, no more, no less – why it should be treated as if it was essentially something else, in a sphere of its own?

Having someone in your life just because you “should” have – what a respect towards them as an individual. (Yes, I’m talking to you, desperate heterosexualists who see people of the “opposite” sex as trophies to hunt.)

All that quarrelling about what gives a person certain sexual preferences – whether people are “born that way” or not – take away the attention from much more important question: why is it supposed to be so wrong to play with someone from your own gender?

Similarly, the obsession in a sharp distinction between “gay” and “straight” does more harm than good. “That’s gay”, “But I’m not gay” – so long as these phrases mean something, sexual equality doesn’t mean anything. Sexuality is an act. Not anyone’s deepest essence.

Have a great Pride week in Finland, and remember to think beyond "love" and "tolerance"!
Lähettänyt Unknown klo 23.57