Meet the Most Dandyish Poet of Kiila-Klubi


The last two weeks have been a good spiral of poetry, great people, elegant surroundings, and a lot of wine. Of course, since it’s Southwest Finland Poetry Week I’m talking about – and this was my first year as an actual performer, not just some random guy at the open mic. 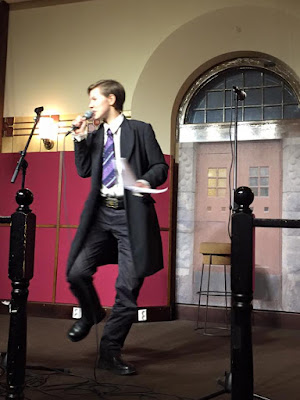 (This is from Kiila-Klubi on 24th November 2015, Restaurant Juttutupa, Helsinki. Photo taken by Andy Willoughby.)

Sunday 15th: Daniil Kozlov a.k.a. Susinukke Kosola, my favourite young Russian-Finnish anarchist poet and the head of the small publishing house Kolera, hosted Kolera’s own poetry club. Total: two laugh-cracking poets and an annoyingly postmodern one. (By the way, I’m Serpent according to the Chinese zodiac. ;) )

Wednesday 18th: Do you know which pub in Turku has both the most beautiful terrace and the most morbid interior (with those damn taxidermy animals)? It’s Hunter’s Inn, and the poetry club of this day happened to be there too. According to Esa Hirvonen, the main coordinator of the Poetry Week, there used to be actually more poetry clubs there – but immediateoly as I stepped in, I myself realized why not anymore. The TVs were showing the plague of humankind, the laudanum of the masses, the madness that makes grown men rant and rave: ice hockey!  The poets hadn’t even started yet, and when they started, I couldn’t hear a half of it because the mic was almost dead. It ended up to be much more interesting to chat with Jouni “The Slow Writer” Tossavainen, whose novel I had reviewed at Kiiltomato.net back in March. Is it unhealthy for a critic be in such good terms with writers he’s reviewed, or vice versa? I don’t know.

Friday 20th: This night I performed as an invited guest, at Kiila-Klubi! The poems were “Lihaa!” (Meat!), “Nemesis”, “Morbidezza”, and a piece that was not a poem but rather a verbal throw-up, “Alentuminen” (Stooping Down). For some reason, the audience seemed to love most the last one… and it was quite a funny one to read, too. As for the other poets of that evening, I can’t tell who was the best. I really can’t. But I have one wish for the customers of the bar called Baari: could you please SHUT UP when someone is reading their poems?

Tuesday 24th: Another Kiila-Klubi, now in Helsinki! Not just anywhere in Helsinki, but in a fancy Art Deco restaurant at which both Finnish and Russian Socialists had reputedly planned for revolution during WWI. My poetry set was partly the same (Lihaa! and Alentuminen the Verbal Throw-up) and partly different, featuring now “Sydän” (Heart) and “Virvatulten jahtaaja” (The Chimaera-Chaser). It was something like three-o’clock AM as we tired and drunken poets ended up at Villa Kivi – the beautiful belle epoque mansion provided for writers by the city of Helsinki. Greetings and best wishes to each amazing poet I had an honour to share my evening with; you know who you are!
Lähettänyt Unknown klo 8.43